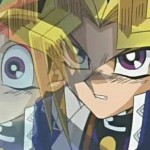 Little Yugi collapses, leaving only the Spirit of the Puzzle to duel against Pegasus. Pegasus tries to read the Spirit’s mind, but T?a, Joey and Tristan use their friendship ritual to focus their minds and block out Pegasus. Yami Yugi plays Mystic Box to get back his Dark Magician, then uses Brain Control on Pegasus’ time bomb. Then he plays the card Yugi played face down, which was the Dark Magic Ritual. Yami Yugi sacrifices Dark Magician and the captured Jigan-Bakudon to summon his Magician of Black Chaos!

Pegasus polymerizes his Relinquished with a Thousand-Eyes Idol to get his best monster, the Thousand-Eyes Restrict! As the Restrict captures the Chaos Mage, it also catches the two cards Yami Yugi played, Karebo and Multiply! Thousands of Karebo swarm over the Restrict then self-destruct due to the Jigan-Bakudon, weakening the Restrict so the Magician of Black Chaos can destroy it. Yugi wins the duel!

After the Shadow Realm area disappears, Pegasus is missing and the souls remain trapped! Meanwhile, Bakura shows up and we find out despite Tristan throwing his Millennium Ring into the ocean, he is still possessed by his item’s spirit which plans to fight Pegasus and gain his Millennium eye.