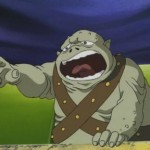 As the duel continues, Yugi’s grandfather reveals how he and Rebecca’s grandfather Arthur Hawkins and he played a Duel Monsters game while sealed in a pyramid in Egypt. Although Yugi uses the Catapult Turtle and Brain Control to eliminate Rebecca’s Millennium Shield and Cannon Soldier, she responds by sacrificing her monsters and plays the Shadow Ghoul, which gains extra attack from each of her monsters in the graveyard. But their game continues to parallel the one Yugi’s grandfather and Hawkins played in the crypt. 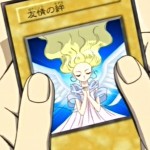 Yugi stalls with the Swords of Revealing Light but surrenders just as his grandfather did against Rebecca’s grandfather. Then Arthur arrives and we discover that Yugi would have won but chose to let Rebecca win so she’d learn a lesson. In recognition Yugi gives her his Ties of Friendship card.