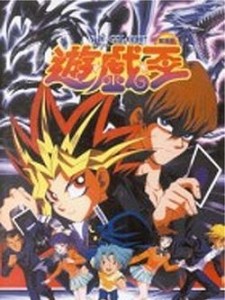 Well the other day I bought the Yugioh Japanese movie! It’s a really good movie, but in Japanese! The only thing that bugs me is the animation is a bit off (as ya can tell from the series on TV)… If you buy the movie on DVD on eBay, you’ll be surprised! I watched it like 5 times already.. has the movie memorized.. so for those spoilers out there, I’ll tell ya about it!

YugiOh: GameKing Movie Version is about a young boy named Shyogo (neighbor of Yugi’s), who buys a pack of cards, and instantly gets a Red Eyes Black Dragon card. The kids were amazed to see that Shyogo, could never get a powerful rare card! Seto Kaiba’s men spy on the kid, and take his card! Seto Kaiba steels the boy’s Red Eyes.. he holds a tournament, and awaits for GameKing (Yugi Yami), to fall into his trap, as becoming the champion! Shyogo wants to fight, but he is weak, after Jnooujo (Joey), saves him from the bullies of Kaiba’s men… Yugi admits the challenge, and heads to the tournament, and duels against Seto Kaiba who uses the new Duel Disk 3D system! Yugi almost lost against Seto’s 3 Blue Eyes White Dragons, but with the help of the possibilities and believing in the heart of the cards, Yugi uses Shyogo’s Red Eyes, and defeated the legendary Blue Eyes, and beat Kaiba!

It’s a good movie, sad, but the battles are okay… personally, the TV battles are better then the movie.. the movie is subtitled in English and Chinese! So if ya a major fan, GO BUY IT!! If the Yugioh movie ever did come to America and be in English, it would be good! I just hope they make it better ^_^!