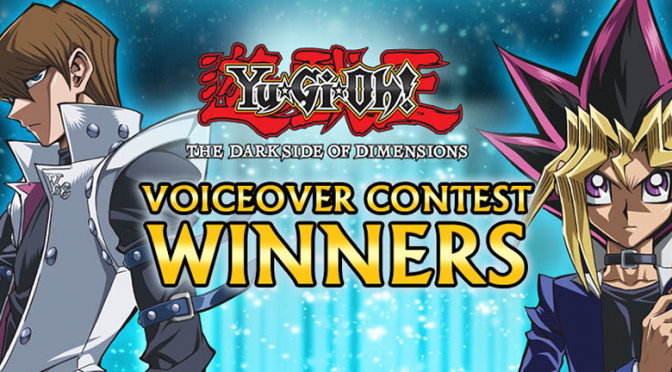 Congratulations to Lindsay Victoria Granduke and Tyler Schmauch who have won roles as Lab Technician A and a Policeman respectively during auditions held at the Yu-Gi-Oh! TRADING CARD GAME World Championship Tournament in Orlando, Florida back in August!

Congratulations to Luis Alfonso and Brooke Stocken who have won roles as an Engineer and a Bakura Fan Girl respectively during auditions held at New York Comic Con in New York, NY back in October!

Congratulations to Ted Kong Yang and Bethany Cardinal who have won roles as Sanpei and Lab Technician B respectively during auditions held at the Yu-Gi-Oh! TRADING CARD GAME World Championship Tournament in Minneapolis, MN back in October!

In Yu-Gi-Oh! THE DARK SIDE OF DIMENSIONS, the stakes have never been higher; the rivalries never as fierce; the risks never so great. One wrong move—one card short—and it’s game over for good. A decade in the making, Yu-Gi-Oh! THE DARK SIDE OF DIMENSIONS features new designs and an all-new story from the original creator of the global phenomenon, Kazuki Takahashi. His masterful tale features anime’s most beloved characters in their long-awaited return: Yugi Muto, Seto Kaiba and their faithful friends Joey Wheeler, Tristan Taylor, Téa Gardner and Bakura. It’s the most highly anticipated re-YU-nion ever!