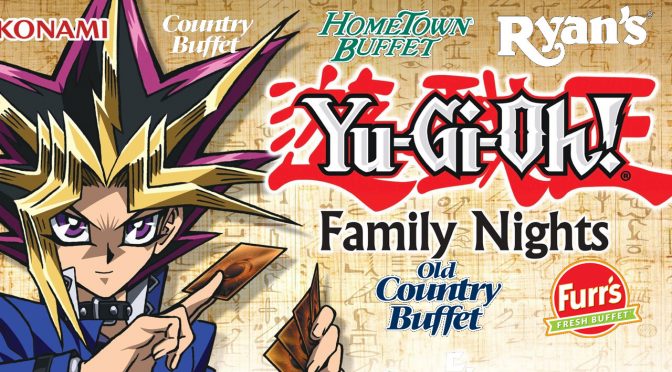 SAN ANTONIO, July 5, 2018 /PRNewswire/ — Ovation Brands’® portfolio of restaurants – Old Country Buffet®, Ryan’s®, HomeTown® Buffet and Country Buffet® – and Furr’s Fresh Buffet® are celebrating all things Japanese with their latest Family Night, featuring the internationally popular Anime brand, Yu-Gi-Oh! The six-week program will include weekly themes centered on the series that has been adapted to a variety of mediums. Family Night is every Thursday from 5-8 p.m. Activities may vary by location.

“For Family Night, we like to spotlight a variety of kid favorites, whether they are domestically or internationally known,” said Mike Griffith, Director of Marketing for Ovation Brands® and Furr’s Fresh Buffet®. “By incorporating international programs, we hope to encourage children and families to look beyond their four corners and appreciate the world on a more global scale. We believe Anime and the Yu-Gi-Oh! Family Night are a fun and engaging way to help achieve that.”

Yu-Gi-Oh! began as a manga in 1996 but was later adapted to a number of forms, from anime, to a widely successful trading card game, to the hit mobile app Yu-Gi-Oh! DUEL LINKS, and of course, feature films. Yu-Gi-Oh! features its main character, Yugi Muto, a heroic boy who, after solving an ancient puzzle, is able to solve conflicts through the trading card game with his alter ego Yami Yugi.

The six-week series will feature a different theme every week based on the Yu-Gi-Oh! series, from Japanese culture to anime, puzzles and more. The following are the scheduled themes, which showcase Yu-Gi-Oh!:

The Yu-Gi-Oh! Family Night will also feature a giveaway. The grand prize is a Yu-Gi-Oh! Prize Pack, which includes one Yu-Gi-Oh! TCG Kaiba’s Collector Box and Starter Deck: Link Strike.

In addition to kid-friendly fun and games, Family Night also serves up home-style meals for guests. Every Thursday from 4 p.m. – close, kids eat for just $1.99 with the purchase of a regular-priced adult or senior meal. Menus may vary. Age restrictions apply.

About Yu-Gi-Oh! Trading Card GameThe Yu-Gi-Oh! Trading Card Game is the #1 trading card game in the world with over 25 billion cards sold. It is a game of strategy, where players create individual Decks of cards collected from Structure Decks and Booster Packs. Two players engage in a Duel while using cards that represent powerful monsters, magical Spells and surprising Traps. Duelists with well-constructed Decks, dominating monsters, solid strategy and good fortune are the victors in the Yu-Gi-Oh! TCG. Konami Digital Entertainment, Inc. is the exclusive licensee and rights holder to the Yu-Gi-Oh! TCG in North America and Latin America.

About KONAMI KONAMI is a leading developer, publisher and manufacturer of electronic entertainment properties and traditional trading card games. KONAMI’s software titles include the popular franchises Metal Gear Solid, Silent Hill, DanceDanceRevolution and Castlevania, among other top sellers. KONAMI is also the manufacturer of the wildly popular Yu-Gi-Oh! TRADING CARD GAME, which has sold more than 25 billion cards worldwide.

The latest information about KONAMI can be found on the Web at www.konami.com.