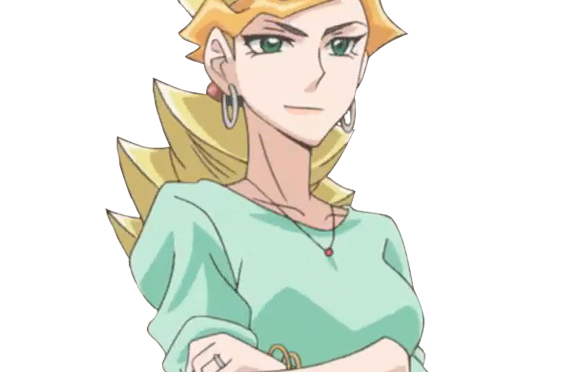 Yoko Sakaki ( , Sakaki Yōko) is is the mother of Yuya Sakaki and the wife of Yusho Sakaki. 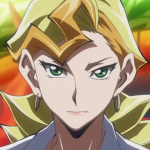 Yoko is a fairly tall and youthful-looking woman of slender built with green eyes and light skin. She has long blond hair the front bangs being golden in color. Her hair is tied in a ponytail and sections out as spikes. Her bangs part to the right side and frame her face. She is commonly seen wearing and aqua-colored long-sleeve shirt and blue jeans with brown low shoes. She also accessories with silver big-loop earrings, two golden bands on her left wrist, and a small golden necklace hanging under her neck.

Yoko is a kind-hearted woman, and is shown to care a lot for Yuya. She understands his true feelings.

However, Yoko is easily charmed by anything she deems cute, such as Sora Perse as well as several other young boys such as Reed Pepper and Dennis Macfield. In these situations, she will not hesitate to support them more frequently than her own son. Yoko’s love for cute things also has caused her to adopt several cats and dogs, including En, Core, Kilo and Watt.

In the past, Yoko had a brutal personality and enjoyed defeating her opponents mercilessly, whether they were rival gangs or pushy men. Her meeting with Yusho Sakaki changed her outlook in life.

In her youth, Yoko was the leader of a biker gang, the Maiami Queens, as “Shooting Star Yoko”. 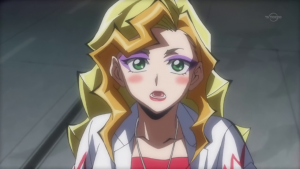