With ten star chips each, Yugi, Joey, Mai and the others head back to Pegasus’s castle ready for their chance to duel him. As the three submit their star chips to enter, the guard stops Tristan, Bakura and Taya as they don’t even have dueling gloves. But determined to get in, Mai flirts with the guard and they all sneak in, shutting the guard outside. Inside the castle they find Bandit Keith who is also waiting for his duel with Pegasus. He tells them that they’ll have to wait for the current duel to end first, a duel between Kaiba and Pegasus. As the gang looks down, they see Kaiba awaiting Pegasus’s arrival so that they can duel. Pegasus enters the room and begins to taunt Kaiba, but he is unfazed. He is here to rescue his brother and nothing else matters. Pegasus points out to Kaiba that they have an audience and Kaiba spots Yugi and the gang. Kaiba is shocked but not surprised to see that Yugi has managed to regain the star chips he needed and Pegasus is also pleased that Yugi has passed all the ‘tests’ he has been set.

Kaiba challenges Pegasus to use the dueling disc system, but Pegasus plays with it, arguing that it wouldn’t be fair as he doesn’t even know how to use it. He agrees to duel with the system, but only if Kaiba lets another player play the cards in Pegasus’s place. Kaiba is confused but things become clear as two guards drag in Mokuba. Pegasus tells Kaiba that Mokuba (still missing his soul) will duel in his place. The others are shocked to learn that Kaiba is not just fighting to rescue his brother, but that Mokuba’s is at stake. Yugi now realizes why Kaiba was so desperate to win the duel they fought on the castle roof. Pegasus warns Kaiba that if he loses this battle, his soul will also become trapped inside a card forever. Kaiba refuses to duel against Mokuba and agrees to use the traditional dueling simulator.

As the room changes and an arena descends, Yugi warns Kaiba that he must trust in the Heart of the Cards and that he should be careful of the Millennium Eye, but Kaiba ignores him. Pegasus begins his turn by playing two cards, a monster in defence mode and a second card, both face down. On Kaiba’s turn, he has a Blue Eyes White Dragon in his starting hand but is uneasy about playing it yet. Instead he plays a card face down but also plays the Rude Kaiser in attack mode and destroys Pegasus’s monster. Not concerned by the attack, Pegasus begins to taunt Kaiba as he plays the Parrot Dragon. But as Pegasus attacks, Kaiba activates the Mesmeric Control, reducing its attack power by 800. Once again unfazed, Pegasus continues to toy with Kaiba, just as he did when dueling Yugi. Kaiba begins to wonder whether Pegasus has known what he is doing before he does it.

Determined to crush Pegasus, Kaiba decides to play his first Blue Eyes, but as he does so Pegasus interrupts to activate his magic card, Prophecy. Like a guessing game, if Pegasus can guess if the card’s attack power is above or below 2000, it will become Pegasus’s. Not only guessing the card’s attack power, Pegasus also announces what the card is, shocking Kaiba who does not understand the power of the Millennium Eye. He then decides to use the Millennium Eye to scout out Kaiba’s hand. Learning that Kaiba has both Crush and Saagi in his hand, Kaiba plays a card face down, ready to counteract the combo that shut down Yugi’s attack force during Kaiba’s last duel (Face Off: Part 2). As Kaiba plays the combo, Pegasus’s Negative Energy card increases the Dark Clown’s attack points meaning it is too strong to host the virus. He then plays the Dark Rabbit which, powered up by the Negative Energy, destroys the Dark Clown and halves Kaiba’s life points in one attack.

With Kaiba’s life points down to 1000 and Pegasus sitting at an untouched 2000, does the Duel Monsters champion have any chance of defeating the game’s creator, especially with the Millennium Eye helping his opponent?
TO BE CONTINUED… 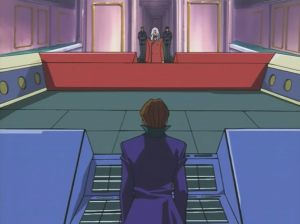