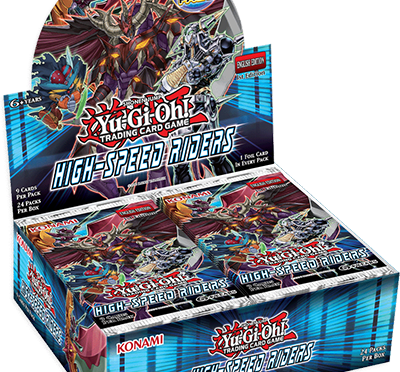 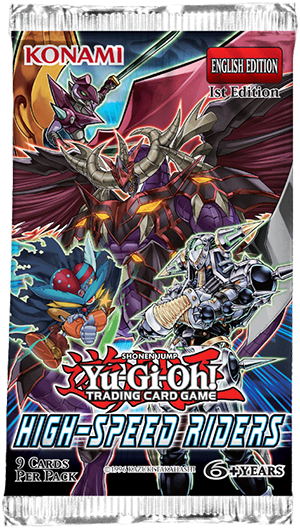 El Segundo, Calif. – September 23, 2015 – Yu-Gi-Oh! TRADING CARD GAME (TCG) players preparing for the new tournament season can rev-up their game to the next level with High-Speed Riders. This special booster set from Konami Digital Entertainment, Inc., a leader in the trading card game category, is inspired by the Yu-Gi-Oh! 5D’s era providing an assortment of cards appealing to both beginning and intermediate level Duelists.

Right out of the gate, players will notice how special this set is, from brand-new Synchro cards to the great selection of other cards, and how High-Speed Riders provides Duelists many Deck-building options. Fans that want to fortify their Extra Deck can check out the new Speedroid, Hi-Speedroid, and Goyo Synchro monsters like Goyo Predator.

Only the most adept Duelists will be able to master the power of PSY-Framelord Omega and the new PSY-Frame monsters.

The awesome Hot Red Dragon Archfiend Abyss will delight fans of Jack Atlas, from the Yu-Gi-Oh! 5D’s and Yu-Gi-Oh! ARC-V animated and manga series, which is just one of the other new cards played by him. Many of these cards, plus other popular cards like Red Dragon Archfiend, will have synergy with the Crossed Souls booster set and the upcoming Dimension of Chaos booster set.

Each High-Speed Riders pack contains nine cards, including one guaranteed foil card for $3.99 per pack and will be available at stores nationwide October 2, 2015.

Two players engage in a Duel while using cards that represent powerful monsters, magical Spells and surprising Traps. Duelists with well-constructed Decks, dominating monsters, solid strategy and good fortune are the victors in the Yu-Gi-Oh! TCG. Konami Digital Entertainment, Inc. is the exclusive licensee and rights holder to the Yu-Gi-Oh! TCG in North America and Latin America.