El Segundo, Calif. – October 1, 2015 – Continuing to excite Duelists around the globe, Konami Digital Entertainment, Inc. (KONAMI) brings its Yu-Gi-Oh! CHAMPIONSHIP SERIES (YCS) tournament to the Dallas, TX area as it begins a new season of Dueling in the United States. KONAMI’s YCS, a premier-level event for the massively popular Yu-Gi-Oh! TRADING CARD GAME (TCG), will be held October 3-4 at the Arlington Convention Center.

The Yu-Gi-Oh! TCG is a card game involving strategy and skill made famous by the Yu-Gi-Oh! manga and animated series. At the YCS Dallas, Duelists of all ages, novices and veterans alike, will compete for a bounty of exciting prizes. The first place winner will receive an Ultra Rare version of the latest most sought-after prize card: Minerva, the Exalted Lightsworn – one of the rarest Yu-Gi-Oh! TCG cards in existence!

YCS Dallas kicks off the Dueling season in the States and begins the journey to the World Championship in 2016. Aspiring Duelists will enter the Arlington Convention Center on Saturday morning believing they have put in the hard work and built the right Decks to have a shot at glory and prizes. Duelists will put their skills up against some of the best players the game has to offer for the chance to advance to the Final Round on Sunday and the opportunity to Duel for the title of YCS Champion.

With the newest products, the Synchron Extreme Structure Deck and Clash of Rebellions booster set adding suspense to the Duels, YCS Dallas will be an excellent environment for live game-testing as Duelists unveil brand new strategies and Decks. Duelists will need to devote extra attention to see how the inclusion of the new cards from these products impacts the YCS standings!

Pre-registration for YCS Dallas will run from 3:00 p.m. – 7:00 p.m. on Friday, October 2 and registration will continue promptly at 8:00 a.m. on Saturday, October 3. Upon registering, Duelists will receive five Clash of Rebellions booster packs for participating in KONAMI’s YCS Dallas.

Round One will start at 10:00 a.m. and the top ranked YCS finishers will earn invitations to participate in the 2016 World Championship Qualifier. Players will use their constructed Decks all the way to the Championship. Duelists can find the answers to many of their questions here:
http://www.yugioh-card.com/en/events/2015/YCS_Dallas.html

Accompanying the Main Event, KONAMI will also be conducting Dragon Duels (for Duelists born in 2003 or later). The Dragon Duel tournaments on both Saturday and Sunday will be sealed, using Battle Pack: Epic Dawn, where each Duelist is given ten sealed Battle Packs to make a new Deck. The top four finishers in the Dragon Duel events will receive winners’ medals, a Regional Deck Box, and a 2016 Regional Game Mat. 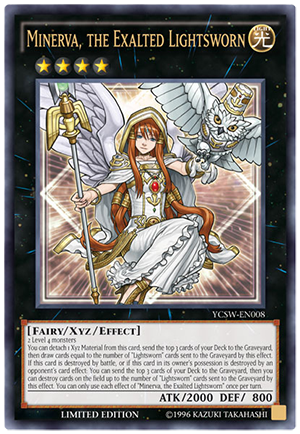 The Main Event winner, the two runners-up and winners of Sunday’s two Public Event playoffs will each be awarded a Super Rare YCS prize card. The Main Event winner will take home an Ultra Rare version of the Minerva, the Exalted Lightsworn prize card, with the other winners bringing home Super Rare versions. Additionally, the top ranked Duelists will win a Top Cut Game Mat for this event.

For more information on KONAMI, the Yu-Gi-Oh! CHAMPIONSHIP SERIES or the Yu-Gi-Oh! TRADING CARD GAME, please visit http://www.yugioh-card.com or call 310-220-8630 to speak directly with a Yu-Gi-Oh! customer support team member.