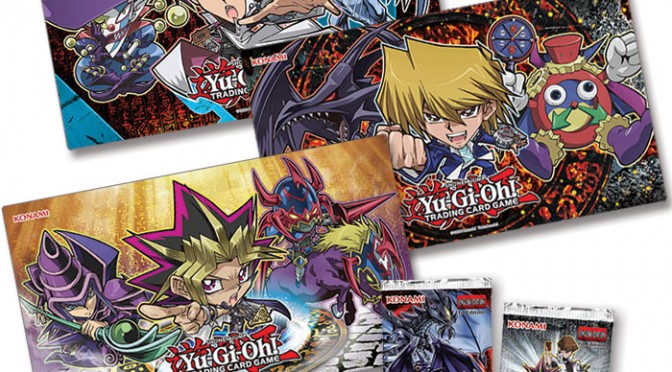 El Segundo, CA – (November 13, 2015) – Those trying to check off everyone on their holiday list need to look no further than the abundance of offerings from Konami Digital Entertainment, Inc. (KONAMI). Mass market and hobby stores across the country will be freshly stocked with Yu-Gi-Oh! TRADING CARD GAME (TCG) products for beginning and veteran players, making it easy for gift-givers to find the perfect assortment of new and exciting presents this holiday season. 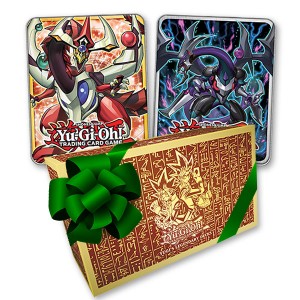 An easy choice for ultimate gift-giving props is Yugi’s Legendary Decks. Just now hitting store shelves, this latest Yu-Gi-Oh! TCG release is a magnificent collector’s set that contains three different Decks used by the “King of Games” himself, plus several unique, collectible foil cards, all in one gold foil-stamped box for an MSRP of $29.99.  This remarkable box set is overflowing with dozens upon dozens of fan-favorite and collectible cards, easily pleasing both the veteran or budding Duelist. Filled with iconic cards such as Black Luster Solider, all five pieces of Exodia, the Forbidden One, Valkyrion the Magna Warrior, and the special, long-awaited Arkana-style Dark Magician, each box set includes three different 41-card Decks. Yugi’s Legendary Decks also includes three brand-new Secret Rare cards: Electromagnetic Turtle, Dark Renewal, and Black Illusion; three Ultra Rare collectible (non-playable) historical cards celebrating the Duelist Kingdom storyline, including Glory of the King’s Hand, Set Sail for The Kingdom, and the Duelist Kingdom itself; and three Ultra Rare collectible (non-playable) Egyptian God Cards: Slifer the Sky Dragon, Obelisk the Tormentor, and The Winged Dragon of Ra. To top it off, KONAMI has added one Ultra Rare “Yugi” Token Card to the collection. 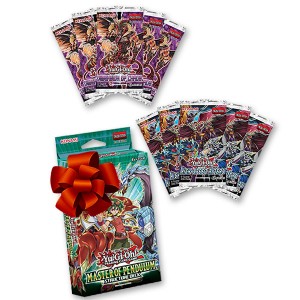 Seeking the perfect present for the Yu-Gi-Oh! TCG fanatic who thinks they have every card available? Then be the first to gift the brand-new Master of Pendulum Structure Deck, releasing December 4. The Master of Pendulum Structure Deck contains ten brand-new cards, including brand-new Synchro and Xyz Monsters. This 43-card Deck has great synergy with the Clash of Rebellions and Dimension of Chaos booster sets, and includes cards that new and experienced Duelists will enjoy. It’s easy on the holiday budget too at just $9.99 per Deck. 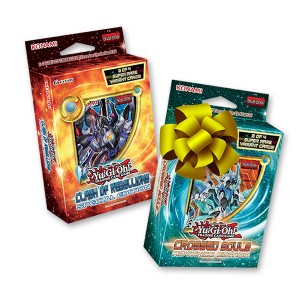 Have a Yu-Gi-Oh! TCG player that loves the thrill of ripping open booster packs? Then the new Clash of Rebellions Special Edition is sure to please and is a great way for Duelists to power up current Decks, or build a whole new Deck. In addition to three booster packs of Clash of Rebellions, each box is guaranteed one of two Super Rare cards, either Ultimaya Tzolkin or Frightfur Tiger, plus one of two Super Rares of preview cards from January’s 2016 booster set, Breakers of Shadow, all for an MSRP of $9.99 per box. Clash of Rebellions Special Edition will be available December 11. 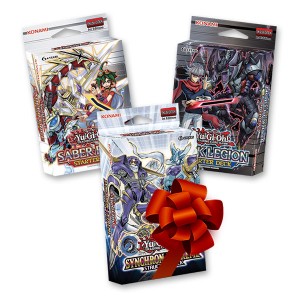 Duelist will have to store all of their new cards so why not give them a Yu-Gi-Oh! Chibi Card Case to house their loot. Large enough to hold a Main Deck, an Extra Deck and a Side Deck, the Deck Case is made of sturdy material capable of handing the rigors of Dueling for hours at a time. Each case is available for an MSRP of $4.99.