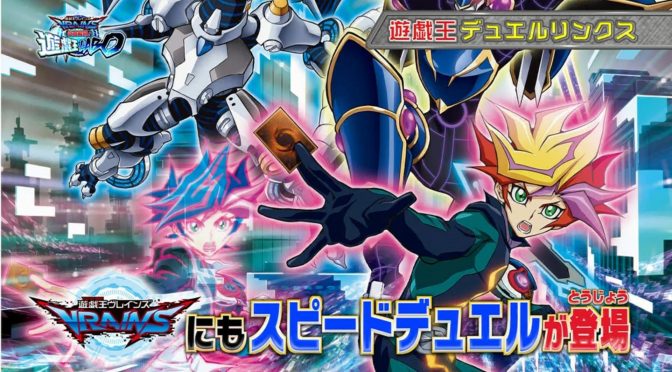 Recently we’ve seen some new concept and reference art come out for the upcoming VRAINS Yu-Gi-Oh! anime series.  It will begin airing in May 2017 as part of the Spring 2017 Anime lineup. A TV special, Yu-Gi-Oh! LABO, aired on April 5th to introduce its characters and setting. 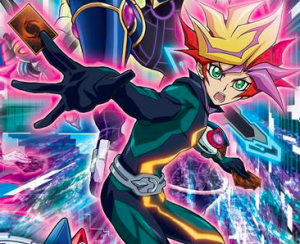 Thanks to The Organization, fans know the upcoming anime will use a familiar sort of dueling. VRAINS will adopt the Speed Duel format which is used in the Duel Links game and the official trading card game. There’s no word yet on whether the rules will be used in the game’s VR arena or real-life tournaments. However, it does look like none of its tenants have been altered.

Characters will be able to draw from 20-card decks, and extra monster zones will be available for use. Players are also given 4000 life points.

Other information about the infrastructure of VRAINS was also shared. Concept art of settings such as Den City were shown in both real-life and VR. Reference art of the anime’s lead Yusaku was also shown, depicting him in both his school attire and dueling persona, the Playmaker.

Along with the LABO airing was some concept and reference art which we have for you below.

Yu-Gi-Oh! VRAINS anime’s synopsis:
There is a city where network systems have evolved: Den City. In this city, with the advanced network technology developed by the corporation “SOL Technology”, a Virtual Reality space called Link VRAINS has been developed, and in this VR Space, people became excited over the latest way to Duel. They are called Charisma Duelists.

However, in Link VRAINS, a mysterious hacker group that hacks via Dueling has appeared: The Knights of Hanoi. Their goal is to annihilate the AI World known as Cyberse that exists somewhere in the depths of the Network.

However, there is one Duelist who stands against the threat to Link VRAINS. His name is Playmaker. He has become famous in the Network World for crushing the Knights of Hanoi in fierce Duels, without mentioning his name. But the true identity of Playmaker is an Ordinary High-School Student and a hacker named Yusaku Fujiki, who doesn’t like standing out. He pursues the Knights of Hanoi that appear in VRAINS in order to find out the truth of an incident that happened in the past.