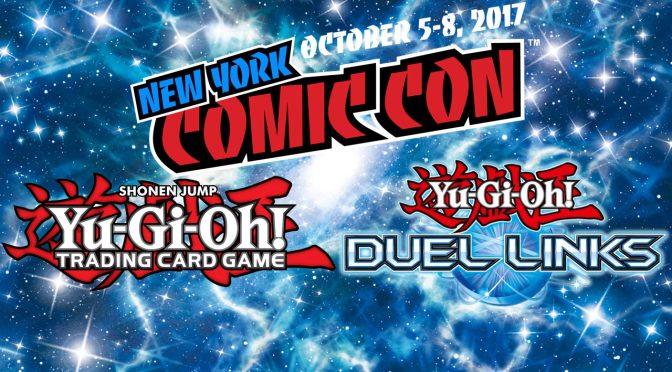 For more information, check out the press release below:

The East Coast’s largest pop culture convention attracted over 185,000 fans last year and is expected to be bigger and better than ever in 2017, with KONAMI in the middle of it all. Always a popular item, fans will want to line up early to create their own one-of-a-kind Yu-Gi-Oh! Token Card. They can choose from 6 different card backgrounds, with Dueling legends Yugi, Jaden, Yusei, Yuma, Yuya or the New York Comic Con Exclusive logo – all suitable for use during Duels!

Attendees looking for that all important Comic-Con exclusive can head over to the booth’s retail counter early in the show to get KONAMI’s limited edition, Yu-Gi-Oh! TCG game mat before it sells out! Available for just $30, this collectible mat features the singular awesomeness that is Seto Kaiba! 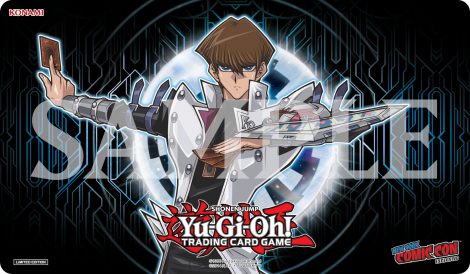 Fans can also get a first look and purchase Yu-Gi-Oh! TCG products at NYCC every day of the show while supplies last, including the recently released Legendary Duelists, Code of the Duelist and Starter Deck: Link Strike, which debuted brand-new Link Monsters, and the Yu-Gi-Oh! TCG Legendary Dragon Decks collectible set. On sale October 5 at NYCC and KONAMI Official Tournament Stores (on sale October 6 everywhere else), Duelists can get their hands on three unique Decks featuring some of the game’s most fearsome dragons, and brand-new cards to power up each Deck!

With over 50 million downloads to date, the mobile app, Yu-Gi-Oh! Duel Links continues to be enjoyed by fans worldwide, and NYCC attendees can experience this exciting free-to-play mobile game in a special tournament format. Choose from the selection of pre-generated Characters to Duel with their signature Decks, and battle your opponent for a chance to earn a limited-edition pin! All participants will win a prize, while supplies last.

[Update Oct 2:] Duel Links for PC via Steam will NOT be ready in time for NYCC so it will no longer available for preview at the con.

Attendees that don’t know how to play the Yu-Gi-Oh! TCG, or want to brush up on their Dueling skills and learn the new Link Summon game mechanic can complete a demo with one of our experts for a show exclusive coupon to claim one (1) free booster pack with the purchase of any Starter Deck! Players wanting to tweak their Deck-building strategies can get helpful hints from KONAMI’s many Yu-Gi-Oh! TCG experts on-hand throughout the show. Plus, players feeling lucky and confident in their Dueling skills can Duel the Master as he sits on his royal throne, for a chance to take home some prizes!

Duelists looking for more ways to get their game on will have plenty of opportunities to do so right at the KONAMI booth, with a variety of free Tournaments held through all four days of the show, including Win-A-Mats, ATTACK OF THE GIANT CARD!! and more! Dragon Duel Tournaments, for Duelists born 2005 or later, will take place on Friday, Saturday and Sunday only.