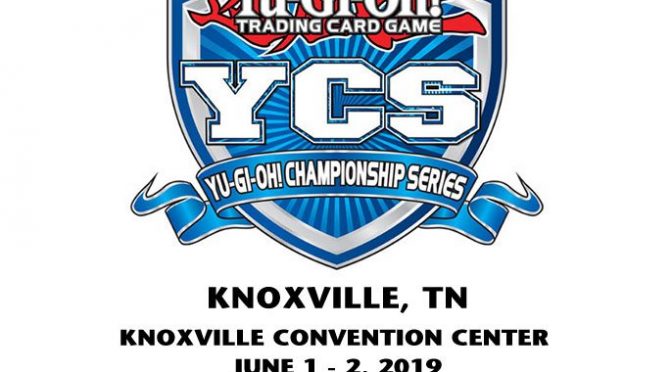 Duelists, if you’re planning to go to Yu-Gi-Oh! Championship Series Knoxville (Jun 1-2), please note that the location has changed.

The new location is:

We are pleased to announce that a “Yu-Gi-Oh! Championship Series” will take place in Knoxville, TN on June 1-2, 2019!

A Yu-Gi-Oh! Championship Series (YCS) is a big, exciting 2-day event that takes place from Saturday to Sunday. Duelists from all over will attend to compete for exclusive prizes, earn invites to their World Championship Qualifier, and spend the weekend Dueling, trading, and hanging out with hundreds of other Yu-Gi-Oh! fans.

In addition to the main Championship Series tournament, there are numerous Public Events, including tournaments specifically for Duelists born in 2006 or later, Attack of the Giant Card!! and Regional Qualifier tournaments. Competitive or casual, there is something for everyone to do at a Yu-Gi-Oh! Championship Series weekend event.

Please note the location for YCS Knoxville has changed! The event has moved across the street from the previous location to the Knoxville Convention Center! See details below so you are prepared when you arrive for the event.

PLEASE NOTE THE LOCATION HAS CHANGED!