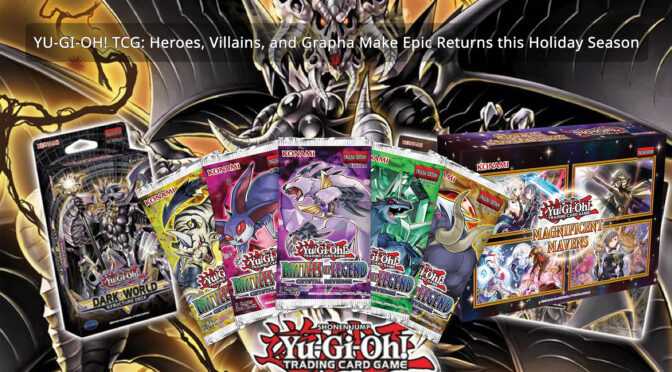 The Holiday Season is coming up quick, and for the Yu-Gi-Oh! TRADING CARD GAME (TCG) it’s a season of second chances! It’s time to Yule, and Konami Digital Entertainment, Inc. (KONAMI) is proud to present three blockbuster releases, all featuring fan-favorite characters from Dueling’s past.

First, the Magnificent Mavens Holiday Box continues the stories of the Sky Strikers, Witchcrafters, Mayakashi, and more. Battles of Legend: Crystal Revenge revives the Crystal Beasts! The strategy is stronger than ever with the addition of their new “Advanced” versions. And Dark World devotees will once again have the most honorable opportunity to Duel alongside the glorious Grapha, Dragon Lord of Dark World with Structure Deck: Dark World. All three releases feature incredible reprints so you can overhaul your Deck, just in time to deck the halls.

Get ready to ring in your Holiday Season early with Magnificent Mavens, released on on November 4th, its loaded with powerful new cards for the Sky Striker, Witchcrafter, and Mayakashi themes. You’ll also find never-before-seen cards inspired by Ishizu Ishtar from the original Yu-Gi-Oh! animated series. And if you’re playing the Tearlaments theme from August’s Power of the Elements, you’ll find plenty of combos with Ishizu’s arsenal. Tournament Duelists can also discover dozens of useful reprints from previous sets, including Black Luster Soldier – Soldier of Chaos, Traptrix Sera, and Swordsoul of Mo Ye.

Magnificent Mavens is an all-foil set with 103 Ultra Rare cards. Six of those cards can also be found as new hieroglyphic Pharaoh’s Rare cards, along with 12 famous cards from the past that are in the set exclusively as Pharaoh’s Rares (that’s 18 Pharaoh’s Rare cards in all, in this set!) First seen in the King’s Court booster set last year, Pharaoh’s Rare cards feature a unique Egyptian Hieroglyphic foilboard. This is only the second time Pharaoh’s Rare variants have ever been available! And how about some stocking stuffers? Every box of Magnificent Mavens includes a pack of card sleeves in one of six exciting new designs, featuring Sky Strikers, Witchcrafters, or Mayakashis. Protect your Deck with these competition-legal sleeves and show your allegiance to your favorite theme. With 70 sleeves per pack, you can sleeve up your entire Main Deck, Extra Deck, and Side Deck.

From November 4th Master the magnificence as Magnificent Mavens arrived in stores. Each Holiday Box contains 4 booster packs with 5 Ultra Rare cards each, plus 1 package of card sleeves: a total of 20 Ultra Rare cards and 70 sleeves. MSRP: $24.99 per box.

Then on November 18, just in time for the Holiday Season, the fan-pleasing Battles of Legend series returns with Battles of Legend: Crystal Revenge. Featuring new cards from every era of the Yu-Gi-Oh! animated series, this all-foil set builds on September’s Structure Deck: Legend of the Crystal Beasts. Jesse Anderson’s Crystal Beast family are front and center with the long-awaited debut of the Advanced Crystal Beasts!

What else will you find in Battles of Legend: Crystal Revenge? Fans of Joker’s Knight and Yugi’s 3 Musketeers of Face Cards will find a new boss monster in Royal Straight Slasher. You can Summon it in the heat of battle for an unexpected attack or destroy every card your opponent controls with its effect! If Royal Straight Slasher’s defeated, you’ll revive three LIGHT Warriors from your Graveyard for a little revenge of your own. And you’ll find more themes from other Yu-Gi-Oh! series in Battles of Legend: Crystal Revenge as well. That includes the Earth Ignis Deck from Yu-Gi-Oh! VRAINS, a powerful Cyberse Link strategy that can barricade the field.

Battles of Legend: Crystal Revenge also includes tried and true tournament cards, perfect for Duelists looking to expand their arsenal. You’ll even find one of the most-wanted Link Monsters in the Yu-Gi-Oh! TCG today: Accesscode Talker! If you’ve played in tournaments yourself, you’ll know this incredible Link 4 finisher hits the field uninterrupted, demolishes opposing cards, and powers up for game-winning attacks. You’ll also find more tournament favorites like Borreload Savage Dragon and Number 100: Numeron Dragon, plus pivotal cards for off-the-wall strategies like Toon Black Luster Soldier and Blackbeard, the Plunder Patroll Captain. And if you picked up Darkwing Blast in October but you still need some older cards for your Blackwing Deck? You’ll find them right here, as stunning foil reprints.

Get your revenge when Battles of Legend: Crystal Revenge storms into stores on November 18. Each 5-card pack contains 4 Ultra Rares and 1 Secret Rare. MSRP: $4.19 per 5-card pack.

Finally, prepare to celebrate the Holiday Season with everyone’s favorite lord of darkness! Grapha, Dragon Lord of Dark World returns, roaring and ready to dominate your Duels! The mightiest rulers of “Dark World” are back and stronger than ever, in December’s Structure Deck: Dark World.

Fusion Summon Grapha, Dragon Overlord of Dark World using the original Dragon Lord and any DARK monster as your materials. With 3200 ATK, this Level 10 Fiend-type can stomp on your opponent’s monsters and hijack their card effects, turning their most important moves into discards that can send them stumbling into a “Dark World” ambush. If the new Grapha leaves the field because your opponent dares to oppose him, you can even bring back the original Grapha and force both players to discard a card. That’s one less play for them, and one more Dark World trigger for you. The great Grapha approves.

These new boss monsters aren’t arriving alone! New soldiers of “Dark World” join the fight, including a Level 4 monster that adds The Gates of Dark World Field Spell to your hand, and a Level 1 monster that can Special Summon up to two “Dark World” monsters. New support Spell Cards strengthen your forces on the battlefield, banish cards from your opponent’s Graveyard, and Fusion Summon Fiends like the new Grapha! All three Spell Cards can also discard your “Dark World” monsters. Finally, a brand-new Counter Trap lets you negate Summons, and it even shields your “Dark World” army whenever it’s in the Graveyard.