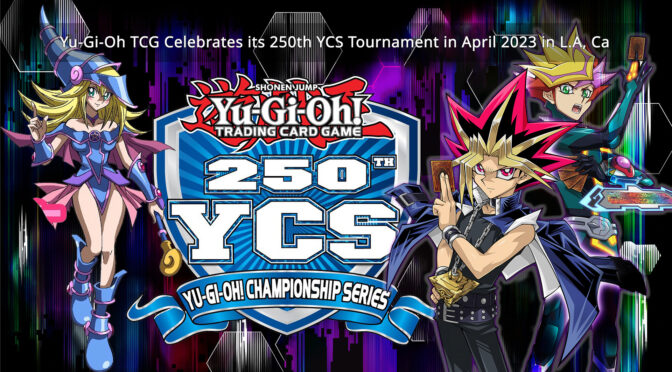 From April 1-2, 2023, Just in time for the 25th anniversary of the Yu-Gi-Oh! TCG, Konami is celebrating the 250th YCS tournament in Los Angeles – a major milestone for the long running championship series.

Players who attend will take home a participation Game Mat and Field Center Card, while winners will take a unique Ultra Rare card and a special YCS Champion trophy. There will also be public events such as Win-A-Mat tournaments and ATTACK OF THE GIANT CARD!!

For more info on the 250th YCS, please see the press release below:

Konami Digital Entertainment, Inc. (KONAMI) is thrilled to announce the 250th Yu-Gi-Oh! Championship Series (YCS) events will be taking place in April 2023 in three different locations. The 250th YCS events will feature the best Yu-Gi-Oh! TRADING CARD GAME (TCG) players from across the globe, Dueling for a chance to be named a champion at these historic events.

Three YCS events will be taking place simultaneously on the same weekend of April 1-2, 2023. KONAMI will host the North America YCS in Los Angeles, California at the Los Angeles Convention Center and the Latin America YCS in Bogotá, Colombia at the Agora Bogotá Convention Center. Konami Digital Entertainment B.V. will be hosting a YCS in Europe in London, UK at ExCeL London.

All registered Duelists in the main events will take home a participation Game Mat and Field Center Card. The three winners of these prestigious events will be taking home a unique Ultra Rare Anotherverse Dragon card commemorating the event and a very special YCS Champion trophy.

Outside of the main tournament, there’ll be plenty of things for attendees to enjoy over the course of the weekend, including popular public events, such as Win-A-Mat tournaments and ATTACK OF THE GIANT CARD!!, as well as newer events including Rivalry of Warlords and digital game tournaments for Yu-Gi-Oh! MASTER DUEL. For special events only available at the 250th YCS, Duelists will be able to compete in Time Wizard events using formats from previous milestone YCS events.

Registration for these 250th YCS events will open in early 2023 so follow our official social media channels for more exciting reveals. For all the latest information regarding Yu-Gi-Oh! TCG products and events, please visit the following webpage: https://www.yugioh-card.com/

Today, the popular Yu-Gi-Oh! TCG is available across the globe, with products distributed in more than 80 countries and 9 languages, to be enjoyed by fans of all ages.