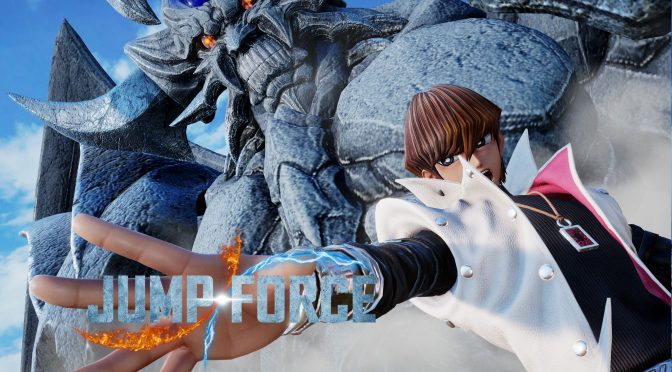 Late Saturday Bandai Namco released the first set of screenshots for the rival of Yugi,  the King of Games, featuring two of his signature monsters by his side.

Seto Kaiba will wield the Blue-Eyes White Dragon and Obelisk the Tormentor in JUMP FORCE! Kaiba will be a playable character as part of the JUMP FORCE Character Pass.

Like Yugi, Kaiba won’t fight his enemies directly and instead summon monster cards to the field to attack for him including his iconic Blue-Eyes White Dragon and the Egyptian God Card Obelisk the Tormentor, which will likely serve as his ultimate attack considering his compatriot uses Slifer the Sky Dragon for his.

Blue-Eyes appears to have something of a chrome sheen to its entire body while Obelisk looks to be fittingly made up of stone, and Kaiba wears his Battle City costume with the white jacket.

In JUMP FORCE the most famous Manga heroes are thrown into a whole new battleground: our world. Uniting to fight the most dangerous threat, the Jump Force will bear the fate of the entire humankind. Create your own avatar and jump into an original Story Mode to fight alongside the most powerful Manga heroes from DRAGON BALL Z, ONE PIECE, NARUTO, BLEACH, HUNTER X HUNTER, YU-GI-OH!, YU YU HAKUSHO, SAINT SEIYA and many others.