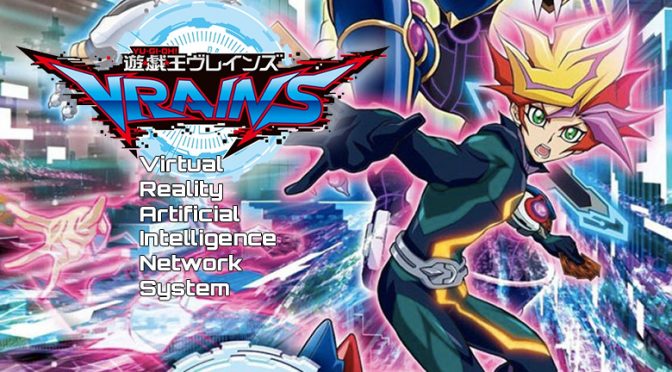 VRAINS is not just one abbreviation, but three. The title stands for three abbreviations combined into one, VR – AI – NS. 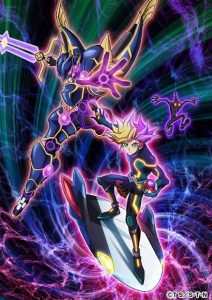 The official release date for the show is May 10th on TV Tokyo. Episode 1 is titled “My Name’s Playmaker” and refers to the nickname Yusaku, the main protagonist, gives himself to hide his identity. VRAINS Ending Theme is “Believe In Magic” by 龍雅-Ｒｙｏｇａ-

Here’s the Yu-Gi-Oh! VRAINS episode 1 synopsis.
“Den City” is where the latest and greatest online network has been developed. There, in the VR Space “LINK VRAINS”, managed by “SOL Technology Inc.”, people Duel day and night. The main character, “Fujiki, Yusaku”, is a cool high school student with excellent skills of observation. In order to defeat the “Knights of Hanoi” who seek to destroy “LINK VRAINS”, he transforms himself into his avatar, “Playmaker” to fight them in Duels while remaining anonymous in real life. But now, a hacker with the same purpose as Yusaku, a man named Kusanagi Shouichi, has information that “SOL Technology” is desperately searching for a mysterious life form. Yusaku realizes the “Knights of Hanoi” are also searching for this entity, spreading a trap across the network, for an operation to capture it…

Thanks to:: ComicBook.com and idigitaltimes.com